Steve Miller Band’s “The Joker” poured out of the Mustang in the driveway as Pete and Nick sat on the front porch. They had just torn open a few packs of baseball cards and decided to make a few swaps before the cards were relegated to a rubber band and the back pocket of faded dungarees.

“Ok, you like the A’s right? I’ll give you a Dave Hamilton for George Brett.”
“Are you kidding me! You must think I’m a fucking idiot. That’s not a fair trade; and besides, it looks like he’s taking a shit!”
Pete’s older brother, Craig, stopped washing his black treasure and walked over with kinked hose in hand.

“You turds need to shut the hell up before I hose you down. Besides, I got Amy coming over and you two dumbasses aren’t gonna ruin my chance at getting some trim.”

“You haven’t got a chance in hell,” Pete spat, shoving a brick-hard powdered slab of gum in his mouth.

“Keep talking big mouth and I’ll give both you and your stupid friend knuckle sandwiches. You’ll be spittin’ out teeth for a week”

Craig continued washing his car, alone with the hose, the suds, the black beauty and the privacy of his own young and perverted mind.

“Yeah, I can’t wait until I get older so I can kick his ass…so Dave Hamilton for George Brett?”

As much as we here at The ‘Fro enjoy Coco Crisp and his exciting style of play, it seems as if the Athletics may have found a new center fielder. Every baseball team seems to want to get younger, and it just makes sense to play a 25 year old over a 35 year old with a potential career threatening neck injury and a .044 average.

Billy Burns is superior to Crisp at EVERYTHING at this point in his career. Crisp had 19 stolen bases in 126 games last year. Burns already has 13. (and this blog  thinks he need to run more!) There is nothing more to convey, baseball fans. This is a no-brainer and a (near) ending to an otherwise great career for the man who once sported a giant afro and punched “Average Game” James Shields.

There has been a bit of controversy lately about Kansas City fans voting in 8 position players for the All Star Game. Kansas City fans have taken it upon themselves be didactic about their “passion” for their team by telling other fans to vote for their own teams and even appalling others by calling it a “popularity contest.” The average baseball fan doesn’t know Lorenzo Cain or Omar Infante from Jean-Paul Sartre, so that is an almost idiotic response to the detractors. As far as “voting” is concerned, all it comes down to is glorified “click-bait” by the MLB brass to get people to go to their website. This is capitalism

disguised as democracy which means only an idiot would sit around making hundreds of fake e-mails in order to sit around pushing a button 35 times (the most you can vote per e-mail) in order to see their favorite player/s in an exhibition game. It all comes down to what cities have the most unemployed/unsophisticated/bored fans.

I have no problem with the game deciding who has home field advantage because the league used to arbitrarily flip-flop it between leagues before Bud Selig decided to step in and make it just as arbitrary. My question is this–why didn’t K.C. fans vote for the players who deserved it? As a child I would sit in the ballpark during batting practice meticulously punching the paper chads, all the while still voting for the deserving players as I wanted to see an exciting All Star game which didn’t include Mike Gallego starting at second. I’m not saying your average American sports fan is a moron, but then again maybe I am. Alas, even a child had a better sense of democracy and fair play than a bunch of adults with an inferiority complex. Let’s hope commissioner Rob Manfred does what Ford Frick did before the start of the 1957 game. Another boring, Midwestern town, Cincinnati, stuffed the box and had 8 players starting. An investigation launched by Frick found that over half of the ballots cast came from the local newspaper, printing up pre-marked ballots and distributing them with the Sunday edition of the newspaper to make it easy for Reds fans to vote often for their favorite players. Frick then decided to appoint Willie Mays and Hank Aaron in the outfield positions they righteously deserved, all but deeming provincial hubris irrelevant and ultimately outing the so-called “voting democracy” as a farce that still exists today in electronic form. It may have been just as “easy” to stuff the ballot box using paper back in the old days, but having to use a pencil to punch tiny chads seems a whole lot more indicative of “fan loyalty” than spending 25% of a lunch break to exploit a ridiculously low-security voting web site.

This is a short piece of fiction inspired by a very real situation.

Hank Bauer slammed down his glass of scotch as his wife, Charlene looked on. Charlene was worried about the glass because it was part of a crystal set and she didn’t want the assemblage to be compromised.

“Hank isn’t supposed to use those,” she thought.

There was now a large gash on top of the deep brown oak desk where the glass had chipped away the smooth, glossy veneer. The glass was still in one piece.

“That son of a bitch Finley embarrassed the hell out of me today — I told that hippy Jim Nash to cut his sideburns,” Hank snarled, “and what does Charlie do? He tells Nash that they’re nice.”

Jim Nash and the “hippy” sideburns that started the fracas.

“Now I’m the laughing-stock of the goddamn team! I tell you Charlene, if anyone pulled that shit in the Marines he’d be picking my foot out of his ass.” Hank had spent nearly three years in the South Pacific during WW2, surviving attacks of malaria, sustaining shrapnel and winning numerous medals. He was proud of all of this.

Hank wasn’t finished. “I’m telling you that this shit wouldn’t have happened in Baltimore. I had that goddamn team on a leash, and that’s why we won it all in ’66.”

“Maybe you should talk to Charlie?” Charlene was speaking in hushed tones.

Bauer took a long slug from his glass, drained it and poured another. “Son of a bitch already fired me in Kansas City, I’m not going to put up with his foolishness again…you know what he wants me to do? He wants me to pinch hit for the catchers during every at-bat. I tell you — it’s a goddamn circus, Charlene.”

“I’ve never dealt with so many bores, bastards and phonies in all my days. If it was up to me I’d roll the whole thing into the sea like a sack of waste.”

Bauer started peeling off his khaki shirt, in turn putting on his military uniform. He usually did this on flimsy pretext. Charlene exited the room quietly. Bauer let the anger rise until he began to see bright, quick flashes. The synapses in his brain entered places they had never been before. He began to see new dimensions in everything that had happened. 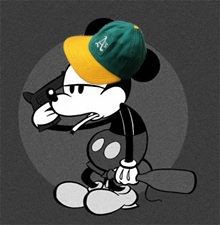